LONG ISLAND (Sept. 14, 2021) – The Long Island Nets, the NBA G League affiliate of the Brooklyn Nets, have announced their 2021-22 season schedule, which tips off Saturday, Nov. 6, at Delaware. Long Island will then host the Capital City Go-Go in the team’s home opener on Wednesday, Nov. 10, at Nassau Coliseum.

Long Island will play 24 home games at the Coliseum this year, including a total of six home contests in the morning or afternoon and 11 home games that will be played on Friday, Saturday or Sunday. The LI Nets’ longest homestand of the season will span five games at the Coliseum, beginning on Wednesday, Jan. 12, versus Wisconsin and ending on Thursday, Jan. 20, versus Fort Wayne.

The schedule also includes 24 road contests and two games that the LI Nets will play as a part of the annual NBA G League Winter Showcase in December. Long Island’s longest stretch away from the Coliseum will span six games from Saturday, Feb. 5, at Motor City through Wednesday, Feb. 16, at Grand Rapids, prior to the NBA All-Star break.

All of Long Island’s home games will be featured regionally on WRHU Radio Hofstra University 88.7 FM, and a full broadcast schedule will be released by the NBA G League at a later date.

Tickets for all regular season home games at the Coliseum will go on sale at a later date. To be notified when single game tickets go on sale and to learn about season ticket membership options, contact info@longislandnets.com or call 937.948.2546.

The full Long Island Nets 2021-22 schedule can be found here: 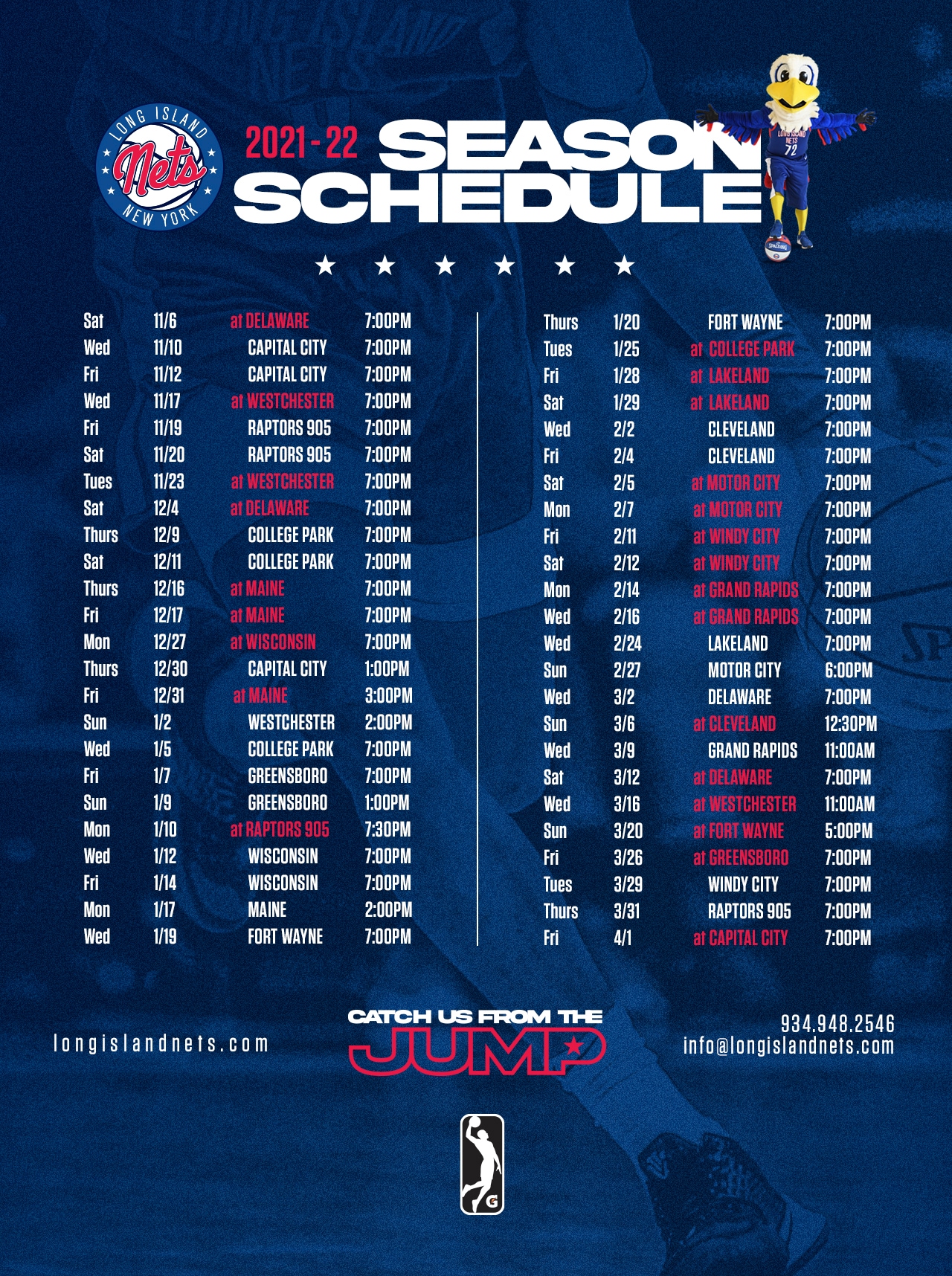 About the Long Island Nets

The Long Island Nets are the NBA G League affiliate of the Brooklyn Nets. The team was founded ahead of the 2016-17 season and plays its home games at Nassau Coliseum on Long Island. Following a record-setting 2018-19 season, Long Island made the playoffs for the first time in franchise history, won the Eastern Conference Championship and reached the NBA G League Finals. For more information, please visit longislandnets.com and follow @longislandnets on Twitter and Instagram.